Powerful. Cheap. Simple. Robust. The RPG-7 is undoubtedly the most famous anti-tank rocket launcher ever devised since its introduction in 1961. It remains in production with more than 9 million units produced to date. The RPG-7 continues to serve with over 40 countries, plus a large number of irregular military groups.

The RPG-7, which stands for the Russian Ruchnoy Protivotankovvy Granatomyot or hand-held anti-tank grenade launcher (although it is more frequently called a “Rocket Propelled Grenade” or “RPG”), is a further development of the 1949 RPG-2, itself based on the World War II German Panzerfaust and US Bazooka. Its chief improvements over the RPG-2 are much-improved range and increased armor penetration.

The RPG-7 is reusable single-shot smoothbore steel tube with a diameter of 40 millimeters. This recoilless, shoulder-fired, muzzle-loaded launcher can shoot a wide variety of rockets. Optical and iron sights generally come standard, although night vision sights can be used.

The middle of the barrel is covered in wood to protect the operator from heat and the two handles are located close together in the center of the weapon.

Another advantage of this versatile weapon is that it can fire inside buildings due to its relatively small back-blast. Nonetheless, this weapon gives off a highly noticeable flash, noise, and smoke.

After 10 meters, the rocket’s internal rocket motor ignites and four stabilization fins fold out, giving the weapon a maximum muzzle velocity of 300 meters per second.

Normally, the RPG-7 is operated by a gunner and an assistant who holds extra rounds and defends the gunner from attack.

The RPG-7 has a maximum range of 920 meters at which point the rocket detonates. Nevertheless, it is only considered effective out to about 200 meters, at which range it is estimated to have about a 50% chance of hitting a slowly moving 5 by 2.5 meter target.

During its nearly 60-year service life, the RPG-7 has been used to knock out tanks, destroy armored personnel carriers, buildings, fortifications, attack infantry, and shoot down low-flying helicopters. Furthermore the simple RPG-7 brought down more helicopters to date than most man-portable air-defense missile systems. Also, insurgents have made extensive use of “small boats” armed primarily with RPG-7s and machine guns.

Oversized rockets are mounted on the very end of the launcher. Weapons of this style are sometimes called “spigot mortars”.

PG-7VM improved 70 mm HEAT rocket. It penetrates around 300 mm or armor. This rocket flies faster than the baseline PG-7V and is more resistant to crosswinds, hence more accurate;

PG-7VS is a 73 mm HEAT rocket. It is a further improved version of the PG-7VM with increased armor penetration. Yet it preserves weight and dimensions. It penetrates up to 400 mm of armor. This rocket was adopted in 1973;

PG-7VL is a larger 93 mm HEAT rocket. It has effective range of up to 150 m against tanks and 300 m against stationary targets. It penetrates up to 500 mm of armor;

PG-7VR is a 105 mm rocket with tandeam HEAT warhead. It has effective range of 100 m against tanks and 200 m against stationary targets. It penetrates up to 600 mm of steel armor behind ERA and 750 mm without ERA. The same warhead is used by rockets of RPG-27 single-use rocket launcher and RPG-29 reloadable rocket launcher. This rocket was adopted in the 1980s and was intended to counter latest Western main battle tanks of third generation, such as American M1 Abrams and British Challenger;

OG-7V, a 40 mm HE-FRAG rocket with a large lethal radius;

TBG-7V, a 105 mm thermobaric rocket, which has a devastating explosive effect.

The RPG-7 has seen such wide and varied service that it is nearly impossible to list all of the conflicts it has fought in. From the Vietnam War to the Gulf War, the RPG-7 is most certainly combat proven.

The RPG-7 continues to be produced in countries such as Iraq, Romania, China, and Bulgaria. Even though it will continue to serve in low-budget forces for years in a fire-support role, it is being phased out by most militaries from the anti-armor role due to its limited effectiveness against modern main battle tanks. 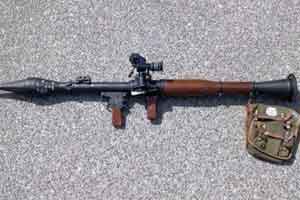